Have you ever noticed your guinea pig keeps raising its head up like it just wants to be petted?

Truth be told, aside from being adorable, this behavior has a significant effect on your guinea pig’s health. So, you should be concerned about why guinea pig jerks head up.

Guinea pigs do have their quirks. One of the quirks is that they will sometimes jerk their head up. Sometimes guinea pigs do this to look for food. It’s a sign of discomfort too.

Guinea pigs’ headshaking may be a sign of a health problem. A typical cause of guinea pigs shaking their heads might be an ear infection.

Guinea pigs occasionally exhibit this shaking behavior in response to flies or other insects nipping at them. Other symptoms to watch out for include lack of appetite, dizziness, rolling on the ground, etc.

Why Is My Guinea Pig Jerking His Head?

There could be many reasons why your guinea pig is jerking his head. Some common causes are as follows:

Your guinea pig could be experiencing a seizure. Seizures can be a sign of a health problem, and they can be harmful to your guinea pig.

Shaking can be one of the reasons for seizures. If you notice that your guinea pig is having a lot of seizures, you should take him to a veterinarian as soon as possible.

If your guinea pig is constantly shaking his head, it might be a sign that he is experiencing a psychological problem. Sometimes guinea pigs can become wobbly.

Why Does My Guinea Pig Keep Lifting Her Head?

There could be a few reasons why your guinea pig keeps lifting her head. One possibility is that she is experiencing a headache. Headaches can be caused by a variety of factors, including stress, illness, or even migraines.

If your guinea pig is regularly lifting her head and seems to be in pain, it might be best to take her to the vet to check out her health.

What Does It Mean When A Guinea Pig Puts Its Head Up?

When a guinea pig puts its head up, sometimes it might be indicating it wants to be picked up or petted.

This behavior is often seen in guinea pigs who are content and feel safe in their owner’s care. But if your guinea pig puts its head up for a long time. That is not a good sign.

What Does It Mean When A Guinea Pig’s Head Is Tilted?

Your guinea pig may develop head tilt if he appears to have trouble maintaining his head straight to the front. The problem can be more obvious than just his sideways head posture. Guinea pigs can fall to the ground due to a lack of balance.

They occasionally even rotate their bodies, but only while tilting. Torticollis and wry neck are two other terms for the issue.

The term “wry neck” refers to guinea pigs’ propensity to point their necks in only one specific way. It is also possible that the guinea pig is not feeling well and needs to be taken to the vet.

🐿️ Read More: 4 Reasons Why Is My Guinea Pig Jumping And Twitching | Learn How To Cure Them

Guinea pig head jerking behavior is normal for some guinea pigs also do this from time to time. It can be difficult to distinguish what normal behavior (head jerking) is. However, it’s most likely behavior that guinea pigs do to relieve stress.

Guinea pigs typically twitch and continuously jerk their heads when startled, but this behavior can be a sign of illness or injury.

Why do guinea pigs lift their heads when you pet them?

There are significant reasons for which Guinea Pig Jerks Head Up. It could be both positive, or negative.

If your guinea pig is breathing correctly, raising its head slightly relieves the pressure on the lungs and chest. This is a good thing since our guinea pigs love to be petted and this improves their health. 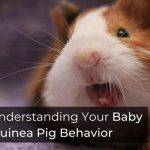 Are Guinea Pigs Hard to Take Care of? | Learn the Proper Caring Method