Chipmunks, one of the rodent members of the squirrel family, are tiny in body and shape. As they are small, they can run and hide faster than other animals if they see dangers.

Wanna know, how fast can a chipmunk run? Are they faster than mice or other rodent animals? As a little, and lightweight animal, a chipmunk could reach a speed up to 21 mph based on the surroundings.

There are several relevant facts here too that impact its running speed.

Hence, in this guide, you will learn about chipmunk’s regular running speed, max and the average height of jumping, etc. with proper explanation. So, let’s move into the next section.

How Fast Can A Chipmunk Run?

Chipmunks are known as the smallest members of the squirrel family. Now, a normal chipmunk has a natural running speed that can go up to 21 mph (33.8 kph).

How do you think they run so fast?

To do so, first, there comes the weight of a chipmunk. A normal chipmunk weighs around 1-5 oz (28-142 g). As the weight of the chipmunk is very low, their body becomes lighter.

Also, the small feet of the chipmunks help them to run faster than other animals too. Because of their agility, they can run anywhere in horizontal fields or vertical walls.

How High Can Chipmunks Jump?

A small chipmunk can jump max up to 3 feet of height. It can be a bit higher than 3 feet too. However, they could have jumped a lot higher, as you see in the other rodent families of squirrels. But the problem arises on their feet.

The legs of a chipmunk are not designed to jump high as the other squirrel families have. They have short squeaky legs that are great for running, but not so good for jumping.

Chipmunks are the cutest when they run from one place to another place. “How fast can a chipmunk run?” is now you know. In fact, speed is a chipmunk’s greatest defense when they think they are in danger.

They can also be annoying when they get into the garden and destroy the plants, fruits, and so on. So, beware of their running speed and you can catch them by using some tools easily. How do Chipmunks Survive in the winter? What Does A Chipmunk Eat For Living? | Do They Get Proper Nutrition? 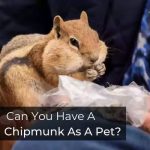 Can You Have A Chipmunk As A Pet? | Facts To Consider